A fourth surgery in less than three years? No problem. In fact, I told my doctor if he needed to cut me open from my shoulders to my knees, I wouldn’t care. Just get the job done. Remove what doesn’t belong.

Last week Matt and I drove to a meeting with our newly appointed team member. A urologist, who happens to be the top adrenal surgeon in the state. He’s one of the many doctors on our team who helps navigate and combat this dreaded thing called cancer. I currently have a gynecologic oncologist, radiation oncologist, general oncologist, and now a urologist, among the slew of techs and nurses helping as well. Adding a new doctor to the team is always met with some hesitancy (on my part), as I become comfortable with those who have treated me over the last couple of years. My team of doctors and I have grown as a family. The hospital where I have received 99.9% of my treatment is a second home.

Adding a new doctor is like welcoming a new in-law to the family. Will I like him/her? Is he/she going to be able to keep pace in our conversations? Can I see myself spending hours and hours with this person? Can I place my trust in this person’s hands? As my medical team has become family, it’s quite entertaining to see what role each of them falls into. The one who is like an aunt whom you can cry and laugh with, and tell your darkest secrets to, all the while feeling great comfort. The epitome of a distant uncle who awkwardly hits it to you straight and leaves you hanging mid-air wondering what he’ll say next. The sister figure who has your best interest in heart, but doesn’t mind telling you the truth when you need to hear it. The cousins who greet you and play catch-up for the mere minutes you have to see them. Every person on our team fills a role in our medical family. Each one serves a purpose and is vital in my fight against cancer.

Though we’ve only met my new doctor once (on our four-year wedding anniversary, might I add), I can confidently say that I trust him. Matt and I both do. He is smart, professional, and compassionate and, after our meeting with him, we are ready to move forward in the next step. As I’ve mentioned HERE, I have a tumor on my left adrenal gland. The CT and PET show “activity” in the mass, however, based on its location, there is not 100% certainty that it is malignant. From what our doctor discussed with us, we know that adrenal masses happen and are often completely benign. Of course, based on my history, we have to be cautious. Caution and cancer go hand in hand.

Upon having our conversation, my doctor, husband, and I decided it’s best to proceed with surgery to remove this unlabeled mass. Usually, there is talk about doing a biopsy whenever a spot shows up on my scan, but it’s quickly ruled out. This time was no different. For a minute we passed over the idea of taking a biopsy of this tumor, but the risk of spreading the cells (cancer or not) is too great. IF it happens to be malignant, we don’t want  it to spread and wreak havoc elsewhere in my body. This is a disease you don’t want to piss off. Therefore, I’m going under the knife once again.

This will be my fourth major surgery since diagnosis. At this point, I like to consider myself a professional. I’m not concerned. In fact, I would rather be cut open to remove the entirety of the unknown intruder cells as opposed to just peeking through the door, taking a piece, and testing them. My scan is showing something that shouldn’t be there, and although it may not even be cancerous, I don’t like things where they don’t belong.

Pruning is a must in all areas of our existence. While I have undergone surgery to remove malignant masses in my body, likewise I have undergone metaphorical surgery to remove toxicity out of my life. We often hear certain things being compared to cancer. “He is a cancer in the group. He pulls everyone down with him.” Nothing about cancer has a positive connotation. It is the worst of the worst. It will destroy you from the inside out. Ridding ourselves of cancer and its metaphorical meaning is vital to live a healthy life. We prune gardens, cutting back the weeds to allow flowers to blossom, and likewise we should be pruning our lives.

Is there an area of your life that is so full of weeds, it’s taking over your world? Are the weeds drowning out who you really are? Have you ignored the weeds, hoping that they’ll go away on their own? We must cut back what doesn’t belong and rid ourselves of what shouldn’t take residence in our lives. It could be a toxic relationship, hidden addiction, or unhealthy patterns. We all have areas that need to be pruned.

Just as surgery hurts, pruning hurts as well. Removing what doesn’t belong will cause pain, and that’s often why many people avoid it. But once the weeds are removed, the blossoms can thrive. Though we are believing this mass is not cancer, it still doesn’t belong. Therefore, this coming Monday (6/16), Matt and I will venture into the hospital once more to do some pruning. The doctor believes he can perform the surgery laparoscopically. If this is the case, my recovery will be much easier. We are confident in this process, and are expecting wonderful results.

Please be praying for myself, Matt, and our newly added team of medical staff. While I receive all of the fun parts of surgery (sedation, pain medication, and doting nurses), Matt sits in the wings for hours awaiting the results.

While we prepare for pruning, ask yourself what needs to be pruned in your life? 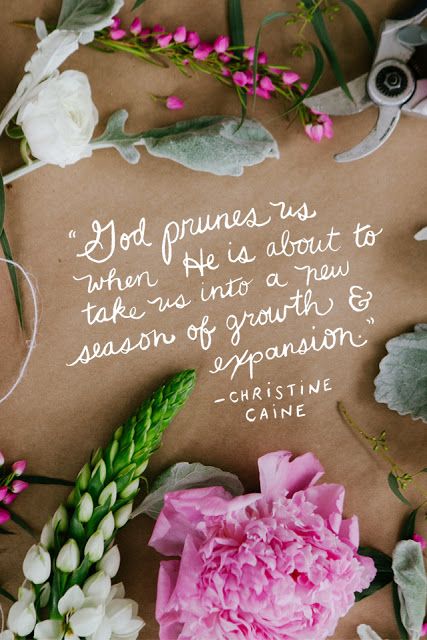 3 Comments on Pruning What Doesn’t Belong