“Do you think I’m going to die?” I remember asking my mom this question four years ago during the first season of my battle against cancer. I was huddled under a blanket, sick, bald, and fearing death was upon me. My mother’s response was powerful and though I didn’t realize it then, quite prophetic.

“Stephanie, I know that we’re all going to die. I’m not sure if that’s what you’re really asking me, though. I think you’re asking if I think you’re going to die from cancer, and my honest answer is, ‘I don’t know.’ I do know that there always has to be the first… In a long line of terminal cases, there has to be one person who beats the statistic.”

She went on to share how two of her friends had passed away twenty years ago from breast cancer and, had they been diagnosed today, may have survived. Medicine has drastically advanced from decades ago and diagnoses that were once deemed terminal are now curable.

“Doctors and researchers finally found a treatment that worked, and there was a first woman who survived breast cancer. I think the same could be true in your case. Someone always has to be the first. Why couldn’t it be you?”

Little did she know, many people (friends, family, and strangers) believed this for me as well. Oftentimes, God gives affirmations through the words of those who surround us. Quickly it became my mantra, my north star, my fight song. Statistics are just numbers, and I am more than a number. I can be the first. I will be the first.

Fast forward to my latest appointment two weeks ago. After receiving a scan that showed an 8mm spot on my lung, my hopes and dreams of surviving beyond the small numbers that I was given were quickly fading away. I then had to wait six weeks before receiving a PET scan to determine what the spot was. Two weeks ago, sitting in a sterile exam room, my husband and I learned my fate.

Displaying an enthusiastic smile, my doctor opened the door and quickly announced, “You’re all good!” Because I had prepared myself for news quite contrary to this, I questioned what he meant. “What does all good mean?!” He handed Matt the report and proceeded to tell us that whatever spot was on my lung was now gone and that the rest of my entire body was absolutely free and clear of disease.

And with that, I continue to beat the statistics!

Though in the beginning of my fight(s) against this disease I adamantly refused to know numbers, I now carry them proudly. I’m inching closer and closer to the five year mark when I can officially be deemed “in remission,” and I crave the numbers. The statistics for surviving my stage and type of cancer are astounding, so knowing them gives me fuel to stand up against my enemy.

The smaller the number, the bigger the miracle. Sometimes I think we are called to face Goliath in order for God’s power, goodness, and mercy to be brightly displayed for all to see. God performs “smaller” miracles that we tend to overlook because we don’t see them fitting our grandiose idea of impossible. So sometimes, I think we are burdened with a giant so big that our rescue becomes louder than we could possibly share ourselves. God is mighty to save. Through tears, I know this to be true.

In order for me to fully comprehend that, I need the numbers. I don’t share with proud disregard to many of you facing your own Goliath. I don’t share to set myself apart. I don’t share these statistics to boast in what I have done, but rather what God has. By giving these numbers a platform, my hope is that you can grasp the faith that I’m not the only one. See, I may be the first, but you may be too.

I shouldn’t be here. Many of you know that I was given a less than 20% chance to survive the first year. Meaning, it wasn’t likely that I would make it to 2013. After hearing the clear report two weeks ago, I asked my doctor for numbers. I needed the statistics. I needed to see, hear, taste, feel, and know the miracle. By rough and quick guesstimation, my oncologist shared that I am one in fifty million. Y’all (for perspective’s sake), according to the 2015 census, there are 8,550,405 people in New York City. To think that I am one in over five and a half NYC’s is mind blowing. A miracle on a grand scale.

In addition, there are only 10-15 cases in the database of the English speaking world that share my diagnosis. Among them, my oncologist (the leading researcher and expert of this type of cancer), has only three patients with large cell neuroendocrine cervical cancer.

Some of you may be like I was in the beginning of my battle, not wanting to know statistics. Not wanting to know the numbers that you are up against. That’s okay. I don’t encourage you to find out, because I was there. I get it. Had I known my likelihood of survival four years ago, I would have been crippled with fear. I may have given up. And some of you know your own statistics. You need to see your enemy in order to better fight it. You go girl. However, regardless of where you’re at in your journey, know that you are more than just a number.

If you’re wondering if you’re going to die, I want to answer that. The truth is yes, we’re all going to die. And though I don’t know if it will be from cancer, I do know that you can be the first. The smaller the number, the bigger the miracle. 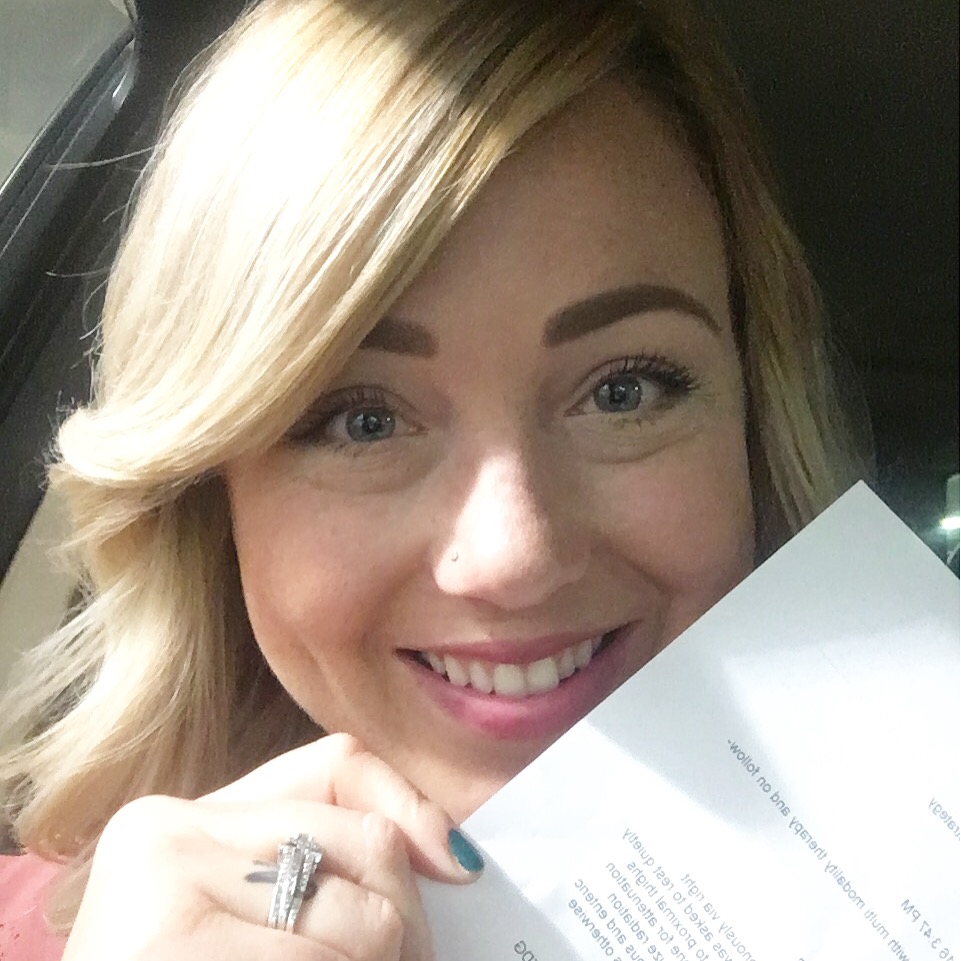 “You are the God who works wonders; you have made known your might among the people.” 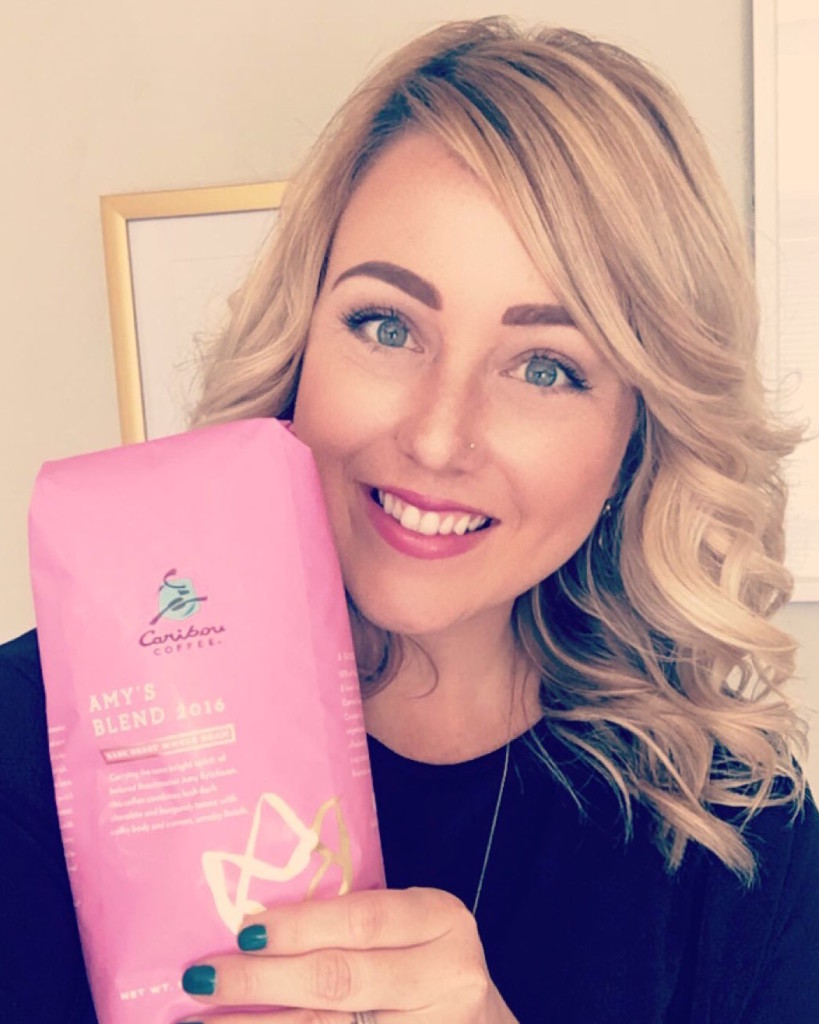 A cancer diagnosis never affects just the person afflicted with the disease. Though the doctor found a malignant tumor growing inside of me, she might as well have told my husband that he had one growing inside of him as well. Cancer is never a battle fought alone.

Through multiple surgeries and treatments, recurrences, and cancer-free scans, my husband has stood firmly by my side in every moment. He has courageously taken the role as my caregiver, and has sacrificially offered to help with my countless needs. While I rested in hospital recliners receiving treatments, Matt sat on the uncomfortable chairs beside me without complaint. When I was weak and pitifully sick, he would assure me and rub my back in comfort. When I have moments of depression and can’t battle fearful thoughts, he encourages and prays for me. He shaved his head when I lost my hair so I wouldn’t feel alone. At my weakest, my husband mustered up strength and bravery to help me through. Matt has been and continues to be my knight in shining armor, my caregiver.

Caregivers simply aren’t given the credit they deserve. Too often, they are overlooked — their importance shadowed. When sickness plagues, the patient receives encouragement, well wishes, and prayers. When cancer is gone, the patient is congratulated. Yet, cancer is never a battle fought alone. This is a disease that is defeated with a team, and quite often the caregiver plays the most vital role. Caregivers are burdened with the weight of a diagnosis as much as, if not more than, the patient themselves. They stay strong when we are weak. They are the listening ears and the sound boards when we need to vent, and cry, and grieve. Caregivers are our heroes and guardians. The ones who willingly choose to stand on the front lines with us. So, the next time you show support for someone battling cancer, thank their caregivers as well. Honor the ones standing next to us in our fight, for they too are deserving of gratitude.

This year, Caribou Coffee is launching a community video project in partnership with Tribute.co to pay tribute and thank caregivers everywhere. For the past 21 years, Caribou has supported Breast Cancer Awareness in memory of their original Roastmaster, Amy Erikson, who lost her battle with cancer in 1995. Part of their effort is to recognize the caregiver as the often unsung hero in the cancer battle. Launched in 2013 as an innovative technology for showing gratitude, Tribute.co is an online web application that makes it easy to organize a group, collect videos, and create a beautiful collaborative video montage.

For each video submitted on the #CaribouTribute page throughout October, Caribou will donate $5 to CancerCare as part of their overall $250,000 contribution to the national nonprofit organization. Caribou is also donating 10% of Amy’s Blend coffee and merchandise sales throughout the month of October. Amy’s Blend coffee comes out every Fall in honor of Amy in two blends — the vibrant and sweet original blend and the fuller body Dark Roast.

If you’re like me, you love coffee and caregivers. As not only a cancer survivor, but as someone who simply couldn’t have survived cancer without a caregiver, I encourage you to participate in this special opportunity during the month of October. Drink Amy’s Blend and record your very own Tribute video for a caregiver you love, respect, and admire. I also encourage you to view my Tribute video where I thank my amazing caregiver, my husband Matt. Also take a moment to view other tributes here, they are inspiring and heartfelt — A beautiful display of gratitude to caregivers everywhere. Let’s show our caregivers how grateful we are for the love, sacrifice, and care they give to us! Record your tribute today! 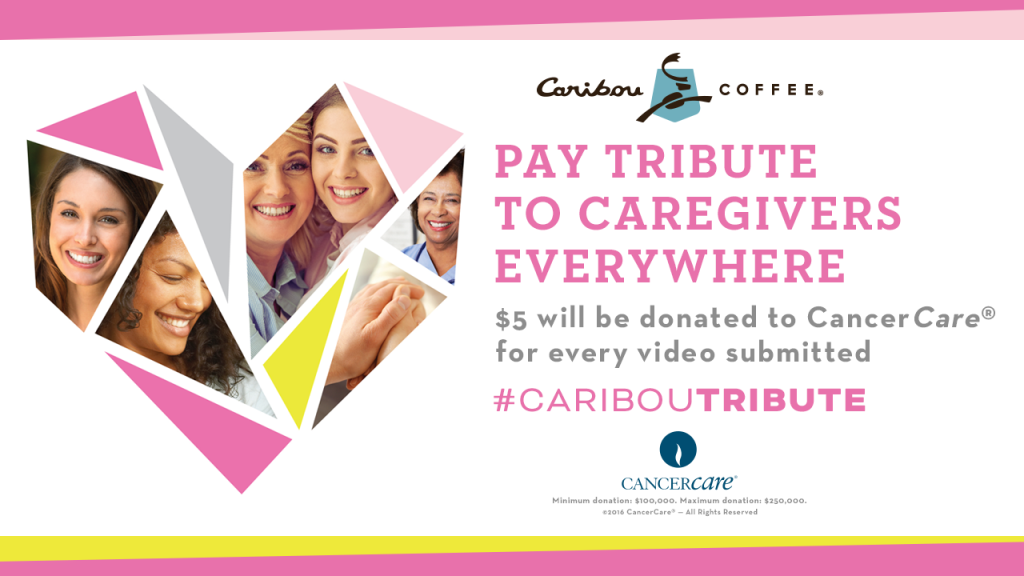