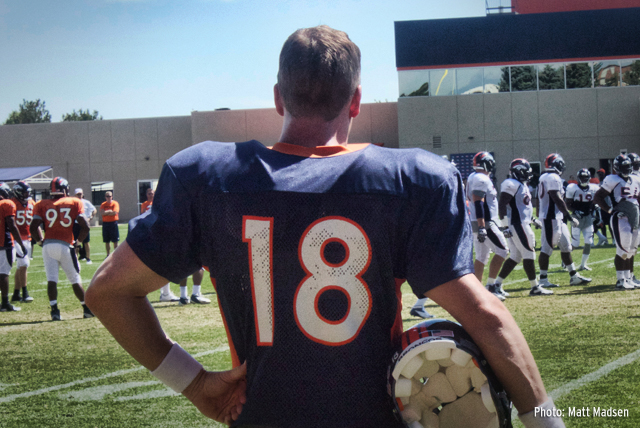 The Denver Broncos quarterback is referred to by many nicknames. However, after Saturday afternoon, I’d primarily refer to him as genuine, kind, and authentic.

There have been many moments of incredible blessing in my fight against cancer. Abundant and overwhelming amounts of gifts, kind words, and support. The platform to meet with others and share my story. Innumerable opportunities for writing and motivating. Open doors I would have not experienced without this disease barging into my life. Though cancer has brought tremendous grief and loss, it’s also brought with it a wave of encouraging gifts and bright rays of hope.

Through my journey, I have been stripped raw of my previous notions about life. Cancer tends to do that — quickly sloughing off areas that don’t really matter. It cuts down to the marrow and brings an awareness of who we should be and how we should respond to those around us. What car we drive, what house we live in, and how much money we make is trivial in the grand scheme of things. Life is about relationships. Life is about compassion towards each other. Life is about finding joy no matter the circumstance. Life is about uncovering hope and sharing it with those around us.

On Saturday, Matt and I spent time with family. Catching up with his dad and grandparents, chatting about my upcoming season of treatment, and sharing laughter as usual. I’m blessed by his family, and from the moment he brought me home to meet them, they welcomed me with open arms. When I was diagnosed nearly three years ago, they wept with us. They rallied around us and have fervently prayed alongside us for my healing. His grandparents are some of the sweetest people I have ever met. His grandfather, a ninety year old World War II veteran, shared his excitement about his upcoming “honor flight” to visit the memorials in Washington DC. Matt’s grandmother told us how she loves her new iPad and enjoys playing Candy Crush and keeping up to date with her grandkids through Facebook.

Soon, we said goodbye and began the trek back home. Barely ten minutes into the drive, my phone began to ring. Immediately, “No Caller ID” appeared on the screen, and I was left wondering who was on the other end. Considering our adventures through medical bills, I tend to assume it’s someone asking for our money. I answered, “Hi, this is Stephanie,” and was shocked at the voice I heard in response.

“Hi Stephanie, this is Peyton Manning.”

The steady southern drawl behind the five-time NFL MVP and Super Bowl champion was saying my name. Peyton Manning was calling me on my cell phone. Believe me, I’m still in shock. In utter amazement, I asked, “Are you for real!?” only to be answered with a polite, “Yes, it’s Peyton.” Peyton… THE Peyton. Manning. Peyton Freakin’ Manning. Oh my word. My Denver Broncos quarterback was talking to me. He went on to explain that my husband had written him a letter sharing my story and that he wanted to personally reach out to to tell me that he was praying for me and cheering me on. We spoke for a while. He asked about my upcoming treatment, sharing well wishes and telling me to continue to fight strong. He was so nice. Yet nice doesn’t fully describe him. Invested. Peyton was invested in my story, and was genuinely interested in knowing how I was doing.

The conversation came to a close, as the team was heading to San Francisco for the upcoming pre-season game against the 49ers. I thanked Mr. Manning for taking time out of his busy schedule to call me. We said goodbye and hung up. Then, I screamed. I stared at my husband wide-eyed, with the largest grin plastered on my face. I could not believe that Matt had written Peyton Manning, and more-so that Peyton Manning had read his letter and personally responded. I cried tears of happiness and disbelief and asked, “Did that really happen?” more times than I can recall.

The man that you see throwing accurately targeted passes to his receivers is more than a great football player. He is a class-act, devoted to more than just the game. Though meticulously focused on the field, he understands with great awareness the impact he has outside the lines of the gridiron. His life displays compassion, and he has always focused on using his platform as a way to bless others. This was no more apparent to me than during our conversation. This man, with arguably the highest profile job in professional sports and a full schedule both on and off the field, took a moment out of his life to reach out to me and share encouragement.

Though a small gesture to some, the lasting impact our conversation will have on my life is unforgettable. Life is about relationships and those around us. No matter his fame and presence in the National Football League, Peyton Manning gets it. He understands that life is found in bringing joy to others. For that, I am grateful.

(As a side note, Peyton Manning played a phenomenal game after our conversation, going 12/14 for 102 yards, 1 touchdown, and a rating of 120.8 in just over one quarter of play in a 34-0 Broncos win. That being said, I’ll gladly assume the position of the good luck charm for the Denver Broncos this season.)

“Let each of you look not only to his own interests, but also to the interests of others.”

10 Comments on “Hi Stephanie, This is Peyton Manning.”